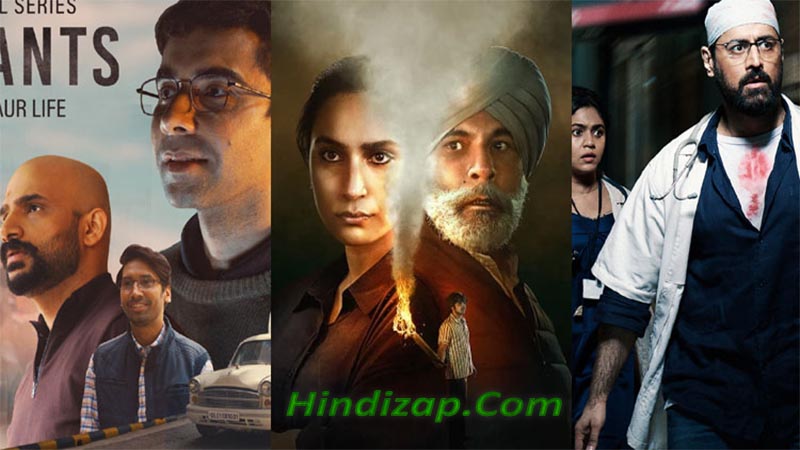 The rise of OTT platforms and the popularity of web series among Indians is responsible for the revolution that takes place in the sectors of entertainment and media. In the last 4 to 5 years web series have gained more popularity in India than movies.

Web series are long storytellers in the form of many episodes. In India, where the Govt. is promoting the “Digital India” program, OTT platforms are the best to enjoy and get yourselves entertained. Due to some good web series like Sacred Games and Mirzapur, the popularity of web series has touched the skies in India.

The audience has been showing interest in quality content instead of any other movies with a big name like “Khan” and “Kapoor” attached to it. So they choose web series over television because it brings bold and challenging stories.

Let’s have a look at some best Indian web series that received the highest IMDb user ratings and won the Audience’s heart, and are ruling digital platforms.

Aspirants, TVF’s web series containing 5 episodes ruled the digital platform. Ever since the show was released, the plot has left viewers stuck to their screens. The story revolves around UPSC aspirants and their journey, life, and struggle.

The main characters of the film are Abhilash, Dhoomketu, and Guri, Who come with their dream to study in the best of best coaching institutions, carrying one goal in common, and that is to crack the UPSC examination. With the help of these characters, the struggles of UPSC aspirants in real life, their journey has been told. With the 9.7 IMBd rating, Aspirants has topped the list.

Dhindora is based on a family drama in which Youtube star Bhuvan Bam is playing the leading role. It is directed by Himank Gaur. The story centers around a middle-class man “Babloo”, Janki and Bhuvan. And how their lives take a 360-degree turn.

All the 3 characters and apart from them 6 more characters are played by Bhuvan himself, as he plays in his popular Youtube channel “BB ki Vines”. These characters are also popular in Youtube and gain popularity, as he comes up with new and unique ideas. where he plays all the characters by himself.

Dhindora is an interesting series to watch, reflecting good acting skills and multitasking. With the 9.7 ratings, it is on the second spot of IMDb ranking.

On the third spot, we have the 2019 released Spy thriller action drama “The Family Man”. Manoj Vajpayee played the lead role in the series, who played the role of Srinkant Tiwari who works for a National Investigation Agency.

While he tries to protect the nation from terrorist, he also has to protect his family from the impact of his job. The film is directed by Raj Nidimoru and Krishna D.K. The series got 11 nominations at Filmfare OTT awards and eventually won 5 out of it. It got an 8.8 IMDb rating.

IMDb shares best of 2021 in a social media post:

Sanjay Kapoor starrer “The Last Hour” is the first-ever supernatural crime thriller in India. The writers of the series bring more drama to the series and keep raising the stakes for the character. The movie explores the dark side of Shamanism. The concept of the Shaman traveling to the space between the living and dead is brilliantly explored. With a 7.5/10 IMDb rating, it comes in the 4th spot.

Sunflower is a black comedy that is directed by filmmaker Vikas Bahl and produced by Reliance Entertainment. With a 7.5 IMDb rating, it is in the 5th spot. Actor-Comedian Sunil Grover has played the main role in the series. The name of the character which he played is Sonu. The story revolves around a murder mystery based in a middle-class housing society of Mumbai called “Sunflower”. The murder mystery presented with humor is unique in some aspects.

With an 8.6/10 IMDb rating “Candy” is in 6the spot.  It is a crime thriller drama based on the mysterious disappearance of a school student, bullying, brutal murder, and sexual assault.

Richa Chadda impressed the audience with her acting skills, she played the role of a police officer Ratna Sankhawar.  And actor Ronit Roy plays the role of a teacher. The story is filled with lots of twists and turns that will keep you hooked to your screen.

Ray is a Psychological thriller that will keep you stuck in your seats. With an IMDb rating of 7.2/10, this series will surely give you a dose of entertainment.

It is called a poetic tribute to the legendary Indian filmmaker Satyajit Ray. With an amazing and very talented star cast like Ali Fazal, Manoj Bajpayee, Gaj Rao, and many more, this thriller drama is a must-watch for those who followed the legendary Satyajeet Ray and those who don’t follow as well. It has an IMDb rating of 7.2.

With the IMDb rating of 8.5, Grahan has got the 8th spot on the list. It is an emotional drama of 8 episodes that will leave you with a bag of love, hate, and betrayal.It has given a strong message that violence never does any good.

It is inspired by the popular novel “Chaurasi” by Satya Vyas. It stars Pavan Malhotra, Zoya Hussain, Anshuman Pushkar, Wamiqa Gabbi, Teekam Joshi and Sahidur Rahman. The story revolves around the killing of an honest Journalist. Directed by Ranjan Chandel, it is streaming on Disney+ Hotstar.

November Story is the most remarkable crime thriller drama in Tamil. Story of the series is centred around a computer who has to save her crime writer dad who is battling Alzheimer and is a prime suspect of a murder that is committed in a vacant house.

The drama got an IMDb rating of 7.9. The Director of the series is Indra Subrahmanian. Actress Tamannah Bhatia played the leading role in this. She played the character named “Anu”. Actors Vivek Prasanna and GM Prabhu added a lot of weight to narration as the supporting cast.

With the IMDb rating of 8.9, Mumbai Diaries 26/11 has got the 10th spot in the list of best web series.  The crime action thriller is based on the Cowardly attack done by some Pakistan-based terrorists in Mumbai on 26 November 2008, Which shook the entire country.

Although many movies have been made about that attack, this series is unique because it also highlights the difficulties faced by medical personnel, which make it worth watching. The series is directed by Nikhil Advani. Actor Mohit Raina has played the role of Dr. Kaushik Oberoi.

Have you watched these popular shows on Digital Platforms, you may share your thoughts regarding the content and performances you loved the most.