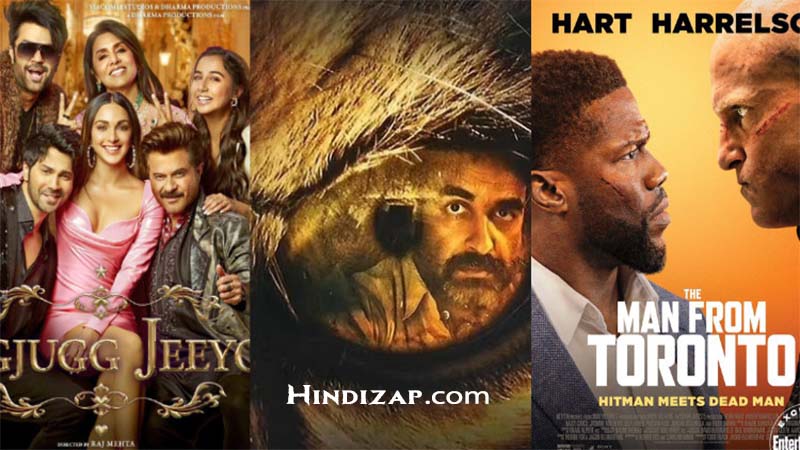 24 June, 2022 Friday Release Movie Hindi, Tamil, Telugu & English Movies List: Like last week you will have plenty of options to choose which movie you want to prefer to watch as there are many movies set to hit the theatres and OTT platforms this week also.

Mark the calendar and get the popcorn ready as we have an interesting lineup of movies-shows that we have compiled and think should be on your radar for the upcoming Friday.

Films like Bhool Bhualiyaa 2, Vikram, Major, and 777 Charlie are already having their dream run at the box office, it will be interesting to see which upcoming film will give stiff competition to these films.

Below are the notable new releases of upcoming Friday to watch in theatres and OTT platforms like Netflix, Amazon Prime, Zee5, Disney+Hotstar, etc.

We have included two web series Avrodh: The siege within and Money Heist: Korea also as they were highly anticipated and we think, should be on your watch list.

Varun-Kiara led Juggjugg Jeeyo is all set to hit the theatres this Friday, made by the makers of 2019 blockbuster Good Newwz. There are a lot of expectations from the film as trade experts have been comparing this flick to Bhool Bhulaiyaa 2 considering the response its trailer has gotten from the viewers. However, it remains to be seen whether it will live up to the expectations of trade pundits or not.

Method actor Pankaj Tripathi will be seen this Friday in an insightful story of man-animal conflict-based film Sherdil-The Pilibhit Saga. The film is set in a village near Pilibhit Tiger Reserve of UP, near the Indo-Nepal border. Tripathi is playing Gangaram who is going through hardship in his life which leads him to do the unthinkable.

OTT platform SonyLIV’s highly anticipated series Avrodh the siege within is returning with its season 2 this Friday. The series has an IMDb rating of 7.7 out of 10. Like the first season, it will be based on the chapters of journalists Shiv Aroor and Rahul Singh’s book “India’s Most Fearless” on the Indian Army.

The Korean version of the successful heist drama french series Money Heist is all set to appear on the streaming platform Netflix on June 24 this week. The series is directed by Kim Hong-Sun and will be comprised of 12 episodes.

5- THE MAN FROM TORONTO

Famous Bollywood actors Kevin Hart and Woody Harrelson will be seen soon in the action-packed comedy The Man From Toronto. Directed by Patrick Hughes and bankrolled by Columbia pictures. Watch both the seasoned actors run into each other at a holiday rental this Friday only on Netflix.

South superstar Vijay Sthupathi’s long-awaited romantic drama Maamanithan finally hitting the theatres this Friday. Vijay is featured in the blockbuster Vikram which is still having the dream run at the box office, the actor’s role is widely praised in the film. Watch Makal Selvan on the big screens this Friday.

Kalayirasan and Anandhi led Tamil film Titanic will hit the theatres this week, it is set in Kodaikanal village, Coimbatore, Chennai. M. Janakiraman is in the director’s seat for this flick, it is backed by CV Kumar under the banner Radhakrishnan Dhanapal.

Muklawa actors Ammy Virk and Sonam Bajwa will be seen sharing screen space again in the upcoming rom-com punjabi film Sher Bagga. Directed by the young Jagdeep Sidhu, Ammy along with the acting also produced the film with Dalit Thind.

Punjabi actor-cum-singer Kulwinder Billa will feature as a main lead in the upcoming romantic comedy Television, Mandy Thakkar will be playing the female lead opposite Kulwinder in the flick. It is set in 80’s punjab.