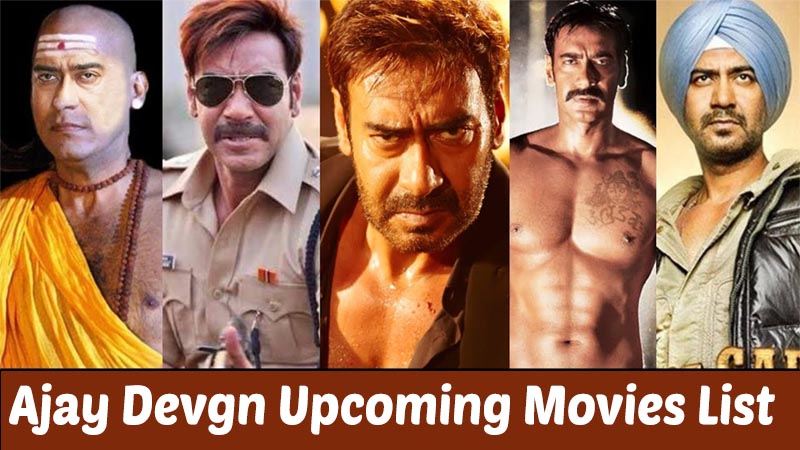 Find Ajay Devgn upcoming movies 2022 & 2023 with complete details and information. Bollywood actor Ajay Devgn is originally called Vishal Devgn, is one of the most acclaimed and popular stars of Bollywood.

Ajay Devgn never planned to make a career in acting, however his father Veeru Devgn’s connection with films made this possible, Veeru Devgan was a popular action director. Ajay’s first film ‘Phool Aur Kaante’ makers’ first choice was Akshay Kumar but Ajay grabbed the opportunity and the film became a hit.

Indra Kumar and Ajay Devgn to collaborate again for a comedy film called ‘Thank God’, Sidharth Malhotra and Rakul Preet Singh are also the important part of this film.

2015’s hit suspense thriller Drishyam is to back with its sequel after seven years. Ajay Devgn, Shriyan Saran, Ishita Dutta, Tabu reunite for this.

Ajay Devgn confirms the south Indian Film Kaithi Hindi remake and locked the release date too but the film was delayed due to schedules and COVID-19. The shoot begins in Jan 2022.

Neeraj Pandey to direct a film based on the greatest political thinker, philosopher, economist, and royal advisor Chanakya and the megastar Ajay Devgn to play a key role there.

According to the sources, Ajay Devgn-Rohit Shetty’s next Singham will be an action-packed cop drama where veteran Jackie Shroff plays the main antagonist. Ajay to end terror in occupied Kashmir in Pakistan.

Sons of Sardaar is the sequel to the 2012 hit comedy film Son of Sardar. Ashwni Dhir will again be going to direct the second part will revolve around the Battle of Saragarhi. The film is expecting to release is the starting of 2018.

Satsang is a social drama directed by Prakash Jha. This superb director-duo of Prakash Jha and Ajay has given some fantastic films in the past such as Gangajal, Aarakshan, and Raajneeti. Once again they are back to another social subject. Katrina Kaif will be seen opposite Ajay in the film.

Raajneeti was a 2010 hit political-thriller drama directed by Prakash Jha and now he is ready with its sequel Raajneeti 2 featuring Ajay Devgn and Katrina Kaif in the main leads.