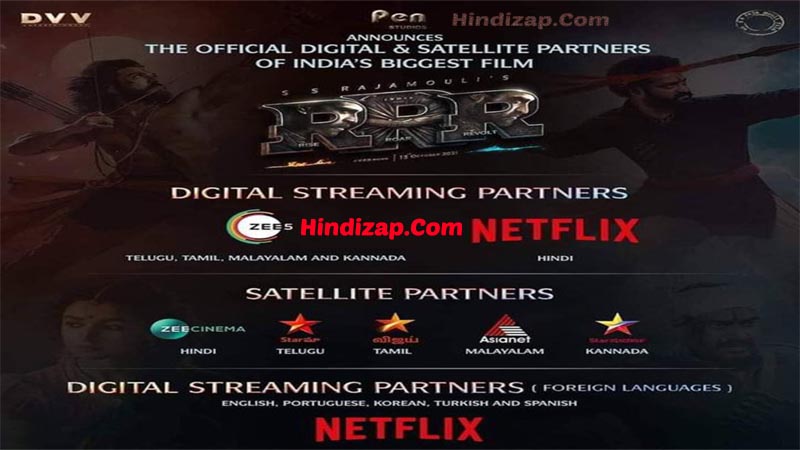 S.S Rajamouli’s directorial much-hyped and long-awaited pan India period action film RRR graces the silver screens on 25 March 2022, here we are talking about the details of the OTT release date (all languages), TV premiere (all languages), digital and satellite partners.

Rajamouli along with the direction wrote the screenplay of the film. The big-ticket film stars many big Bollywood-Tollywood names, it is set in 1920, based on two Indian revolutionaries fighting against the British Imperial.

R.R.R OVER THE TOP (OTT) PREMIERE

The post-theatrical digital rights of RRR are acquired by Zee5 and Netflix. RRR will be premiered on the OTT platform Netflix in Hindi and foreign languages English, Portuguese, Korean, Turkish, and Spanish. And on homegrown streaming platform Zee5 in Telugu, Tamil, Kannada, and Malayalam languages.

Thereby the Telugu, Tamil, Kannada, and Malayalam viewers can watch the film on the digital platform Zee5, and the Hindi and the English version will be premiered on the leading streaming platform Netflix.

The head of PEN Studios Jayantilal Gada had said in an interview that they will premiere the film on the Digital platforms after 90 days of its theatrical release. So, RRR will most likely be premiered on the streaming platforms by the last week of June.

RRR will be broadcasted on these channels in different languages:

N.T. Rama Rao Jr. and Ram Charan are portraying the role of Indian revolutionaries as Komaram Bheema from Telangana and Alluri Sitarama Raju from Andhrapradesh respectively.

The film is backed by D.V.V. Danayya and made under the banner of DVV Entertainments, it is said to be made on a budget of Rs 400 crore. The shooting went on floors in Nov 2018 and concluded in Aug 2021.

Sai Madhav Burra wrote the dialogues, K.K Senthil Kumar is the cinematographer and the Editing is done by A.Sreekar Prasad. The music is given by M.M. Keeravani.

This film is like a celebration of cinema, promotion level is record-breaking itself, posters in public transport, interviews of the team on several platforms, Bigg Boss 15 to The Kapil Sharma Show, all over this has gained much-hyped, now the promotional song is scheduled for 14th March.

Note: The satellite premiere date is yet awaited, however, we will be up to date with the article whenever the broadcasting date of the RRR is announced.