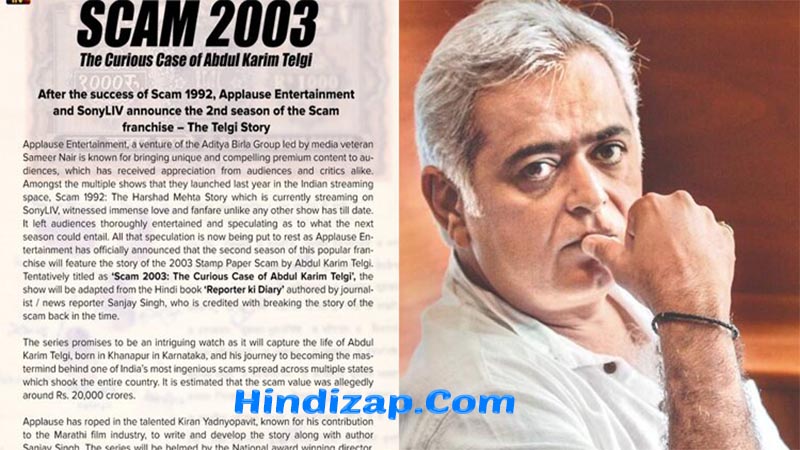 After giving the hit financial thriller web series Scam 1992, in the year 2020, the streaming platform SonyLIV is now all geared up to amaze the audience once again.

The web series will explore the life of the swindler Abdul Telgi, from his childhood to his ingenious scam to further convicted in the crime. His stamp paper scam is being considered worth Rs 20,000 crores.

The stamp paper scam that was spread to multiple states came about in the year 2003 when various bureaucrats and government employees were implicated in the scam along with the mastermind counterfeiter Abdul Karim Telgi.

As per the recent interviews of the head of content, of Applause Entertainment, the writing part has been completed and the filming begins in the last week of March.

Though the release date of this biographical drama is yet to be announced, reportedly Scam 2003: the curious case of Abdul Karim Telgi will premiere on the OTT platform SonlyLIV by the third(July-Sept) quarter of 2022.

Though the details on the star cast and other crew members are still under the wraps, we found that the series is being co-written by the Marathi writer Kiran Yadnyopavit with the reporter Sanjay Singh.

The original series will be helmed by the scam 1992 director Hansal Mehta under the banner Applause Entertainment. It will be based on news reporter Sanjay Singh’s book Reporter Ki Diary.

The official trailer of the Web Series scam 2003 will be made available on the social media platforms by June 2022, till then stay tuned to the post as we will be up to date with the article whenever the new updates regarding the series star cast, crew, and trailer comes out.

Talking about Hansal Mehta’s earlier project Scam 1992, it was set in the ’90s revolves around the stock market scam of 1992, the series was released on 9 Oct 2020 and in no time, it had become the most-viewed show of the SonyLIV. The series is comprised of 10 episodes, each episode has a runtime between 42 to 60 minutes. If you haven’t watched the show, you must checkout as it is still available on the platform.