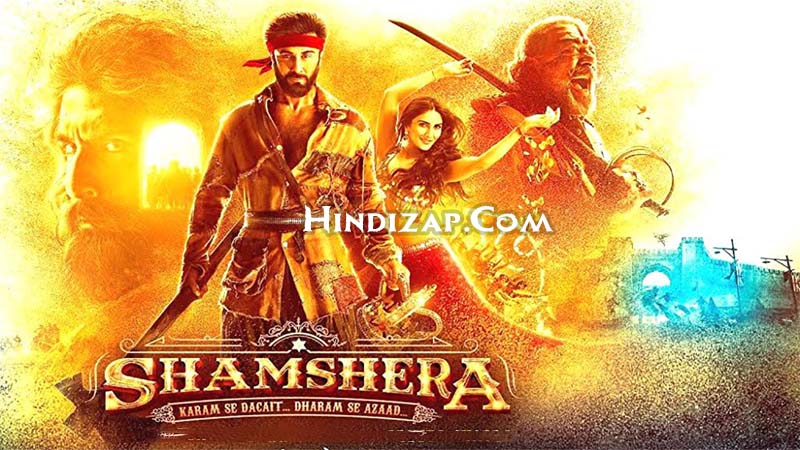 Ranbir Kapoor starrer Shamshera is a much-anticipated Hindi Period action drama film that is all set to have a blast soon. With this big banner action thriller, Ranbir is all set to hit big screens after a 3 long year gap.

Ranbir was last seen in Rajkumar Hirani’s biographical comedy-drama Sanju, which was based on the life of Bollywood actor Sanjay Dutt.

Ranbir got all praise for his role as Sanjay Dutt and the film became the biggest commercial hit of that time with a huge box office collection of Rs. 586.85 Crore.

Now after a 3-year-long break from the films, Ranbir is ready to have a blast with his brilliant acting skills.

The trailer of the film has been unveiled by the makers recently, the trailer is well received by the viewers, it was praised for the cinematography, visuals, and the looks of the main leads Ranbir Kapoor and Sanjay Dutt aka Baba. To know more read: shamshera-trailer-review.

Bollywood’s handsome and dashing star, Ranbir Kapoor will be seen in the male lead role. He is playing the double role of Shamshera and his Son Bali.

Along with Ranbir, the beautiful Vaani Kapoor will be seen in the female lead role of Balli’s younger sister Mrignayni.

Vaani was praised for the role of a transgender woman in Abhishek Kapoor’s romantic comedy-drama Chandigarh Kare Aashiqui.

She played opposite Ayushmann Khurrana in the movie. It was released on December 10,2021.

The teaser of the film was released on May 7, 2018. This 52-second-long trailer was enough to tell how interesting the rest of the film is going to be. Throughout the teaser, the graphic portrayal of Ranbir Kapoor was shown, where he was shown as a dacoit with sharp weapons in his hands.

The release of the film was delayed many times due to COVID-19. Earlier it was scheduled to be released on July 31, 2020.

Later it was rescheduled to June 25th, 2021 but again it was postponed. But now the makers of the film have announced the official release date. The film will hit the big screens on 22nd July 2022, Hindi, Tamil, and Telugu.

This period action thriller is one of the much-awaited movies of 2022 with Ranbir Kapoor making a comeback.

The film is directed by Karan Malhotra who is best known for brilliant direction in his debut action drama “Agneepath”.

The lead role in the movie was played by Hritik Roshan. It became a major commercial success of that time with grossing over Rs. 195 cr worldwide.

The film is bankrolled by one of the popular film producers Aditya Chopra under the banner of his own production company Yash Raj Films.

The music of the film is composed by the National Award-winning brother duo Ajay and Atul in association with Bollywood’s most successful lyricist, composer and singer Mithoon.

The story of the film revolves around a tribe of dacoits during the 1800s, who were fighting for their rights and independence against the British Government.

Although nothing much has been revealed about the film, we can surely say that it depicts the story of the colonial era in India and the struggle of different tribes of the different parts of the country for freedom.