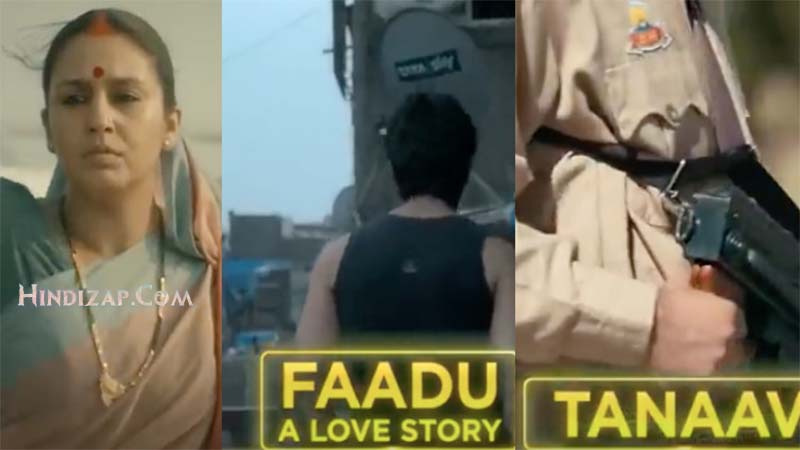 India’s leading OTT streaming platform Sony LIV is all geared up to make your upcoming months more exciting. The streamer always comes up with some bold and unique content for its fans, that is why it is gaining more and more popularity day by day.

Originally launched in 2013, the platform underwent a revamp for the second time in June 2020 and started to stream its own original movies and series.

Now, to celebrate the 2nd anniversary of its new avatar Sony LIV 2.0, the platform on Saturday announced a line-up of its upcoming Indian originals, including new seasons of acclaimed shows including Scam, Rocket Boys, Maharani etc at a grand event.

With delivering the promising content to Indian audiences, the streamer has started giving touch competitions to other OTT giants. It has bagged 18 out of 30 awards at Filmfare OTT Awards.

In its slate of the upcoming premium originals, the platform has promised even much bigger and better for its viewers. In the upcoming 18 month it will deliver shows for a big region of the country in 11 languages including English, Hindi, Tamil, Telugu, Malayalam, Kannada, Marathi, Gujarati, Assamese, Punjabi and Bengali.

Here we have compiled for you the list of Sony LIV’s upcoming  originals that are set to deliver in the upcoming 18 months as part of its 2022-23 slate.

Sony LIV’s acclaimed series Maharani is set to return with its season 2 to show the struggle of Rani Bharti played by Huma Qureshi, as the CM of Bihar. Created by Subhash Kapoor, the drama series was inspired by former Bihar CM Laalu Prasad Yadav, who made his wife Rabri Devi his successor back in 1990s.

The character of Huma is inspired by Rabri Devi while Somesh shah is playing her CM husband Bheema Bharti. Directed by Ravindra Gautam, the second season of the series also stars Amit Sial, Nandan Singh, Pramod Pathak and many others.

Created by Nikkhil Advani, biographical drama series Rocket Boys is set to return with its second season on Sony LIV. Based on the life of two great scientists of the National Homi J. Bhabha and Vikram Sarabhai, the show received critical acclaim from critics and audience.

Actors Jim Sarbh and Iswak Singh have played the characters of Dr. Bhabha and Dr. Sarabhai respectively. Also it features Regina Cassandra and Dibyendu Bhattacharya in the lead role. Abhay Pannu is the director of the show.

Tanaav is the Hindi adaptation of Internationally acclaimed Israeli series Fuada, which is being recreated by Sudhir Mishra and co-directed by Sachin Mamta Krishn.

Along with multiple original series, SonyLIV also announced the series titled Good Bad Girl, which is directed by filmmaker Vikas Bahl, known for his work in acclaimed films like Queen, Super 30, Chillar Party. The star cast of the show has not been revealed yet.

Jehanabad: Jai Break and a Heart Break is Sony LIV’s upcoming series that is being shown by Sudhir Mishra. It is also said that young and talented actress Poulomi Das, who featured in web series Bekaboo 2, has been signed to play an integral role in Jehanabad Series. It is directed by Rajeev Barnwal and Satyanshu Singh.

Sony LIV and popular filmmaker Hansal Mehta have come together to create a new series titled Mission R&AW, based on RK Yadav’s book of the same name on the journey and exploits of the first chief of India’s foreign service agency R&AW, Rameshwar Nath Kao.

Produced by Prabhleen Kaur Sandhu’s Almighty Motion Pictures, the series will showcase intelligence operations that have shaped geopolitics of the Indian subcontinent.

Created and directed by actor-filmmaker Tigmanshu Dhulia, best known for his role as Ramadhir Singh in Gangs of Wasseypur film series, Garmi is an upcoming Sony LIV original series that the story of youth politics set up amidst the backdrop of Bhopal, Madhya Pradesh.

10- JENGABURU: A BILLION DOLLAR CAUSE

Sony LIV will soon premiere a fresh new web-series Jengaburu: A billion dollar Cause, which is part of its upcoming original premium series. it is created and directed by filmmaker Nila Madhav Panda, know for making multiple documentaries and shorts based on social issues such as climate change, child labour, education and films like I am Kalam, Jalpari, Babloo Happy Hai ec.

Jazzy City ’71 was announced on Saturday by Sony LIV, as part of its 2022-23 slate of original shows. It is created by Soumik Sen, known for directing 2014 drama film Gulaab Gang and directed by R.S. Vimal. The details about the star cast is yet to be announced by its makers.

First Election: India 1951 is the first socio-political drama series based on the first general election that were held between October 25, 1951 and February 21, 1952, the very first time after India got freedom from the Britishers in 1947. The series is created and directed by Rahul. Dholakia, known for his National Award winning film Parzania.

Main Sahir Hoon is one of the series announced as part of Sony LIV ‘s 2022-23 slate of upcoming shows.  It is the story of the lead characters named Sahir and Amrita and is Created by Manish Hariprasad who have produced Deepika Padukone and Shah Rukh Khan starrer 2013 romantic comedy film Chennai Express.

Freedom At Midnight is an upcoming epic political thriller based on the book of the same name by Dominique Lapierre and Larry Collins. Produced and show run by Nikkhil Advani, it highlights many incidents from the year of India’s independence and interrelated stories about events and personalities who played a significant role in writing the country’s history.

StuidioNext and Advni’s Emmay Entertainment have come together to co-produced the series while Abhinandan Gupta, Adwitiya Kareng Das and Gundeep Kaur have penned the story.

Summer of ’77: Children of Freedom is the upcoming series of Sony LIV that is created and written by Sudhir Mishra. The further details regarding the shows haven’t been revealed by the makers yet.

Created by Rajiv Rajaram and Drishya Gautam, Meme Boys is Sony LIV’s Tamil series that will follow four unassuming college kids who run  an anonymous meme page that takes on their  oppressive college administration as a joke at a time that led to a college-wide revolution.

Kayyum Kalavum is another Tamil Web-series announced as part of Sony LIV’s 2022-23 slate. Created by Rohit Nandakumar who is onboard as an actor, the series also stars Sanchana Natrajan, Madonna Sebastian, Senthil and Karu.

Subbaraj is attached as a showrunner and Raju is onboard as director. The series follows a compulsive thief and an unlucky pickpocket inching closer to being in love with every act of theft they commit.

Tamil Rockerz is directed by Arivazhagan and is produced by AVM Productions. It follows a notorious pirate group Tamil Rockerz, who publicly announced their plan to leak a massive budget and highly anticipated “Garuda ”, “Athiradi Star ” Adithya’s next film.

To stop them from doing so, a special team headed by Rudra, a. cop with scarred past, must fight against time, unruly fans, and an anonymous network of cyber pirates to secure the movie.

Tamil crime thriller Series Iru Dhruvam, which premiered its 9 episodes in 2019 on Sony LIV is set to return to the platform with its super exciting season 2. Produced by Applause Entertainment, the series stars Prasanna, Nanda, Abhirami Venkatachalam in the lead roles.

The first season was directed by M. Kumaran while the upcoming season will be directed by Arun Prakash. The announcement of the renewal of the series was made in October 2021.

Accidental Farmer & Co. is an upcoming Tamil series written and directed by Suman Jay. Produced by Trend Loud & Open Window, the show stars Vaibhav Reddy, Ramya Pandian, Vinodhini, Badava Gopi and Chutti Aravind in the key roles. Balaji Mohan is onboard as a showrunner in the series.

Nijam With Smita is a popular Telugu talk show set to premiere on Sony LIV soon, hosted by actress and playback singer Smitha. Popular stars of Tollywood film industry Chiranjeevi, Rana Daggubati are set to enter the show as guest.

After the super success of Pratik Gandhi starrer Scam 2003, based on the 1992 Indian stock market scam committed by stockbroker Harshad Mehta, the show’s director Hansal Mehta along with Tushar Hiranchandani are set to return with the second instalment of the franchise titled Scam 2003, which will be based on 2003 Stamp Paper Scam, committed by Abdul Karim Telgi.

Mehta assures that the second instalment will be as authentic and entertaining as the original one but with a completely different approach when it comes to storytelling. The series went on the floor in April this year.