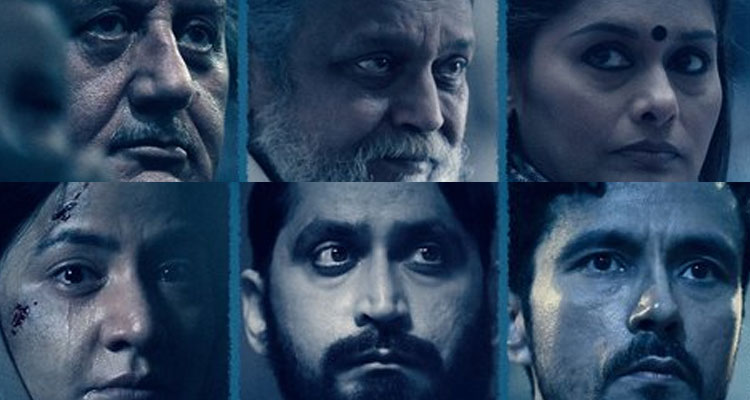 Bollywood’s popular and controversial filmmaker Vivek Agnihotri’s most awaited project The Kashmir Files has finally been released in the theatres worldwide on 11 March 2022.

Vivek Agnihotri is known for delivering bold and gut-wrenching stories such as The Tashkent Files (2019) which was based on the death of former Prime Minister of the country Lal Bahadur Shastri in mysterious circumstances.

The film got an amazing response from the audience as well as critics and was a box-office sleeper hit.  After this, Vivek Agnihotri is back with another hot topic.

The Kashmir Files is based on the real-life event which took place in Kashmir during the 1990s when the insurgency was at its peak which resulted in the killing and the exodus of lakhs of Kashmiri Pandits from the valley.

The writer and director of this most-awaited film Vivek Agnihotri made an official announcement regarding the theatrical release date of the movie on February 8, 2022.

While making the announcement, he urges all, through his social media post, to support the film, which hits the big screen on March 11, 2022.

Earlier it was scheduled to be released on January 26, 2022, on the occasion of Republic Day, but was postponed as at that time the Omicron had already made its grip in India.

The Kashmir Files Box Office Success is indicating toward wait for OTT premiere for some time, this small-budget film put Box Office on storms.

Although the OTT platform of The TKA is yet to be announced, as per the recent interview of the film’s director Vivek Ranjan Agnihotri, leading OTT platforms didn’t want to feature some terminology used in the film.

So, it can be construed from his interviews that, The Kashmir Files will not be released on any major OTT platforms like Netflix, Amazon, etc. As they have a global policy to not use certain terms, thereby we can guess that the filmmaker will have to go with the homegrown streaming platform Zee5 which is also the subsidiary of the TKA’s production house ZEE studios.

Though the streaming date is yet to be announced, The Kashmir Files is expected to come on the digital platform Zee 5 after some stay in the theatres around April-May 2022, some reports suggest by end of March.

The film has a very talented star cast, who perfectly played the character they have given, as we can see in the trailer. Their names are mentioned here:

Earlier, Punjabi actor Yograj Singh, who is the father of former Indian cricketer Yuvraj Singh, was cast for a pivotal role in the film.

Later, he was removed by director Vivek Agnihotri for his controversial remark and hate speech against Hindus at the Farmer’s protest last year and he was replaced by Puneet Issar.

The trailer of National award-winning filmmaker Vivek Agnihotri’s much-anticipated film The Kashmir Files has finally ended the wait of fans, who were early waiting for this since its announcement.

The 3 minutes and 30 seconds long trailer gives you goosebumps and at the same time, it also makes you cry.

The trailer gives a glimpse of the plight of Kashmiri Hindus, who were tortured, murdered by the brain-washed Islamic extremists, and were forcefully made to leave their own homes just because of their religion.

Some intellectual kinds of scenes are also featured in the trailer, which shows some debates and rallies, demanding and raising slogans of Kashmir’s Azadi (Freedom).

The trailer was released with all of its posters and is praised highly by fans and many big personalities of the industry. Tanu Weds Manu actress Kangana Ranaut called it “Wonderful”.

The film is produced by Zee Studios in association with Tej Narayan Agarwal, Abhishek Agarwal and writer/director of the film Vivek Agnihotri under the banners of Abhishek Agarwal Arts and I Am Buddha Production.

If we talk about technical work, cinematography and editing are performed by Uday Singh Mohite and Shankh Rajadhyaksha, respectively. It will be distributed by Zee Studios.