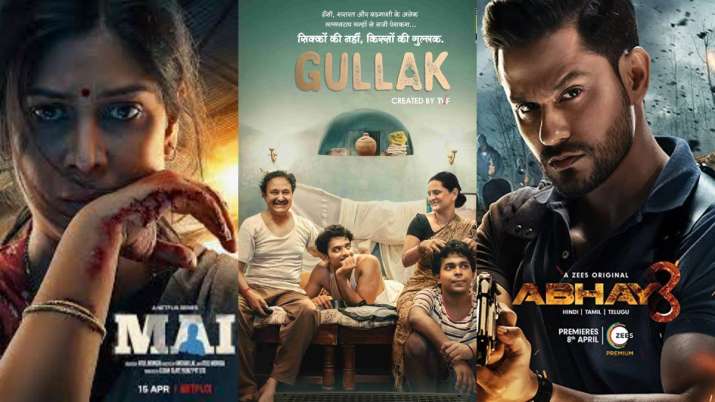 Upcoming Hindi Web Series 2022: Be ready for the edge of the seat thrillers and entertaining content in the coming days, several hit series to back with the sequel or second parts this year.

The pandemic hit the theaters once again, the entertainment industry is to face loss as several big-budget films are getting postponed even after pre-release events and other expenses including promotions and events.

OTT is the life amid this situation, theater artists, struggling actors’ content, big stars’ movies also released on over the top (OTT) platforms like Amazon Prime Video, Netflix, Disney Plus Hotstar, Zee5, and others.

Here’s the list of Upcoming Web Series for Hindi Audiences, take good care at home, watch OTT content until the situations get normal.

The show revolves around an iconic actress that goes missing and further as the quest for her disappearance commences, the dark truth behind the facade of an Iconic actress also begins reveal. It will also star Sanjay Kapoor, Madhuri and Sanjay will share screen after two long decades. They both were last seen in Mohabbat (1997).

Here’s the list of much-awaited Hindi Web Series which can surprise the audience with the plot and performances. Check the list with brief details.

Bollywood actor Kunal Kemmu is winning hearts in Web Series, his edge thrilling Abhay has renewed for the third time, trailer, teaser poster ft. himself looking promising, watch it from 8th of April in Hindi, Tamil and Telugu.https://www.youtube.com/embed/ai_196nK8DI?feature=oembed

Though the makers haven’t announced the release date of the show, the shooting had begun in Nov 2021 and reportedly it will release by mid-2022 on the OTT platform Sony LIV.

Quota- The Reservation is based on the social discrimination done to the lower castes in contemporary times. Directed by Sanjiv Jaiswal who is known in the industry for making films on apartheid-based issues, his 2012 film Shudra: The Rising also revolves around the same topic.

It will premiere soon on the digital platform Baba Play Soon in languages on India Hindi including its dubbed versions Marathi, Bangla, Punjab, Tamil, and Telugu. It stars Anirudh Dave, Aditya Om, and Garima Kapoor who will be playing the lead actress opposite Anirudh.

The director of one of the most viewed Web Series of the OTT platform Sony Liv, Scam 1992 fame Hanshal Mehta seems to come again with a financial thriller show. This time he will be exploring the scam of the year 2003 that is connected with Abdul Karim Telgi.

The show is based on the book Reporter Ki Diary written by news reporter Sanjay Singh. Scam 2003- The Curious Case of Abdul Karim Telgi will also premiere on the digital platform Sony LIV

It will mark the digital debut of the actresses Soha, Juhi, and Ayesha. The show is created by Abundanita Entertainment. It will be streamed soon on the OTT platform Amazon Prime.

The romantic drama web show Made in Heaven was released in the year 2019, and with the IMDb rating 8.3 out of 10 this Zoya Akhtar creation is Now, all set to come up with its second season. The shooting of the show is concluded in July 2021 and now the makers are waiting for the perfect timing to stream the show.

The show will go Intl. in the second season with the big star cast associated with it. Reportedly Actress Mrunal Thakur, Radhika Apte, and Jacqueline Fernandez will feature in the upcoming season. Made in Heaven Season 2 will be premiered on Amazon Prime Video.

Known south Indian actress Trisha is to make her digital debut with the Web Series Brinda. It will be filmed in Telugu and then dubbed in other languages Like Hindi, Tamil, etc.

It is an investigative thriller show, helmed by Surya Vangala. The shooting took place in Oct 2021. And soon it will be streamed on the Sony LIV Over The Top (OTT) platform.

The crime thriller series Mirzapur that made the cult fan following across the nation will be appearing with a third installment this year. The show is set in the eastern UP and follows the rule of Akhandananda Tripathi. It stars Pankaj Tripathi(Akhandanand Tripathi), Ali Fazal (Guddu Pandit), Divyendu Sharma(Munna), and Shweta Tripathi (Golu).

The controversial web series Aashram starring Bobby Deol will hit on your digital screens soon, It explores the story of a conman Baba Nirala, who created a cult following among his blind followers which resulted in the accumulation of huge wealth. It will be streamed on the Over The Top (OTT) Platform Mx Player.

The IMDb rating of Jamtara season 1 is 7.3 out of 10, the show was released on 10 Jan 2020 and became popular following which the second season of it is on the way. It stars Amit Sial, Dibyendu Bhattacharya, Aksha Pradsany, Sparsh Shirivastav in the main lead roles. Jamtara-Sabka Number Ayega will premiere on the leading digital platfrom Netlfix.

Shefali Shah starrer Delhi Crime is based on the 2012 Delhi Gang Rape. It is a crime drama OTT series which was premiered in March 2019 on the streaming service Netflix. The show had been praised by the critics and the audience.

Delhi Crime also won the Emmy Awards in the category of Outstanding Drama Series in Sept 2020 and is the first Indian Web Series that holds this record. Following the popularity of the show, Netflix further announced the renewal of the show, with the main lead cast reprising their roles again. The IMDb rating of the show is 8.5 out of 10. It will revolve around the investigation of the murder of four students.

Varun Dhawan and South Sensation Raashi Khanna to come together for an action thriller of Raj & DK directors duo, Hollywood Citadel Hindi remake is still under confusion where Shahid Kapoor or Varun doing this with South Stars.