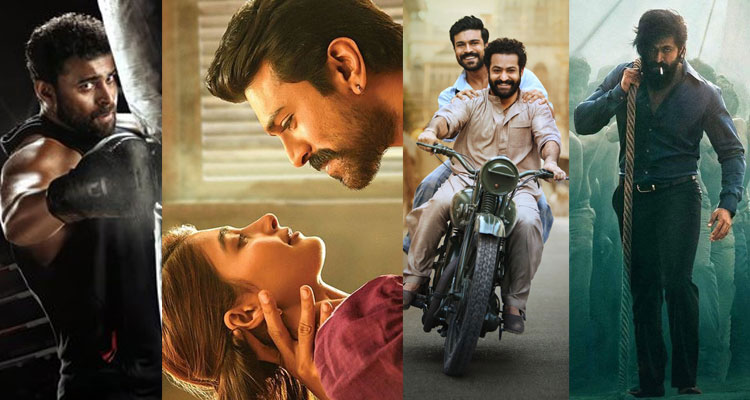 We know how Bollywood remake of South Indian cinema had made the huge business at the box office in past with the films like Dabbang, Drishyam, Kabir Singh, Bhool Bhulaiyaa, etc and there are more movies on the way like Jersey, Vikram Vedha, Bachchhan Paandey, Anniyan and many more.

Many south actors like Allu Arjun, Mahesh Babu, Nagarjuna, Rajinikanth, Mohan Lal, Vijay Devarakonda, etc have made their fan base amongst the Hindi audience through their class act, dialogue delivery, and dance skills.

Following this the second-largest film industry in the world Bollywood’s many actors are now not hesitating to act in the south Indian cinema, thereby you will also see the Hindi Cinema actors e.g Sanjay Dutt, Tabu, Raveena, etc in some of the upcoming South Indian movies.

We have already seen Alia Bhatt and Ajay Devgn in the biggest release Indian film ever Rajamouli’s recent release RRR, in cameo roles.

South Indian Movies are creating more buzz even among Bollywood audiences. After the success of Bahubali, KGF, and Pushpa, this stat reaches its peak.

So, here we are sharing with you some of the highly anticipated Upcoming South Indian Movies that are soon going to hit theatres near you, and Bollywood audiences would love to watch them in the Hindi version, most of them are releasing in Hindi too.

Sandalwood’s star actor Naveen Kumar Gowda aka Yash is coming Next year with his second installment in the series of K.G.F, you all must have heard that powerful dialogue which was once in everyone’s WhatsApp statuses from the first chapter of K.G.F ‘Is Duniya Ka Sabse Bada Yodha Maa Hoti Hai’ Prashanth Neel’s directorial this Period drama film K.G.F: Chapter 2 will be released on April 2022 next year.

It is made up of Rs 100cr. Budget, the most expensive movie in Kannada cinema. Two known Bollywood faces also will be seen in the franchise namely Raveena Tandon, and Sanjay Dutt.

South Superstar Prabhas has many big films in his bag for the upcoming year, He will be doing the role of Lord Ram in Om Raut’s next project Adipurush. Kriti Sanon & Saif will also feature in the role of Janaki & Lankesh respectively. Om’s last film Tanhaji (2020) was a big hit at the box office grossing approx Rs 360 crores worldwide.
Adipurush will be bankrolled by Bhushan Kumar along with Krishan Kumar and Om Raut. Reportedly in Nov 2021, films shooting has been completed, and now after the completion of post-production work, it will be ready to hit the cinema theatres by August 2022.

The film’s shooting is currently ongoing. Janhvi Kapoor was the first choice of the makers for the film but due to her date issues, she was replaced by Ananya Panday. It is being helmed by the known south Indian director Puri Jagannadh.

Ghani is a period sports drama film directed and written by Kiran Korrapati, Fidaa(2017) fame Varun Tej will be in a lead role, and Anna Suneil Shetty who seems on a spree of doing south Indian films, will also appear in the film, it also features Dabangg 3 fame Saiee Manjrekar, Jagapathi Babu. Naveen Chandra, Nadhiya, and Upendra. The film was to release in mid-2021 but due to corona, makers of the film have re-scheduled its Release Date for Dec this year.

This south Indian action thriller is a Kannada-Telugu language film, as is it is simultaneously shot in both languages. Prashanth Neel and Vijay Kiragandur are the director and the producer of the film respectively, who also jointly made K.G.F: Chapter 2 which is in the no. 1 list of our article.
It will be released by mid-2022 in all 5 languages Kannada and Telugu along with dubbed versions of Hindi, Malayalam and Tamil. It is made under the production of Vjay’s home banner Hombale Films.

Kollywood superstar Vijay will feature next in Nelson Delipkumar’s third project named Beast, let you know, that Nelson’s recent release Doctor grossed Rs 100 crores within 25 days, his earlier film Kolamaavu Kokila (2018) was also a commercial success at the box office. It is bankrolled by Sun Group founder Kalanithi Maran under his home production Sun Pictures, Known music-composer Anirudh Ravichander is composing the music for the film.

Acharya stars Chiranjeevi, Ram Charan, Kajal Aggarwal, Sonu Sood and Pooja Hegde, this long-awaited action drama is made up of Rs. 140 crore budget. There is also a controversy attached to the film in 2020 writer Rajesh Manduri has made allegations against the film saying that the movie is plagiarized from his script, though both the production houses have denied the charges saying that it is baseless and just a gimmick.

After giving one of the highest Tamil Grosser of the year 2021 named Vakeel Saab, Pawan Kalyan aka Power Star will be seen next in a period-action adventure in the year 2022. It will be a pan-India film featuring Niddhi Agerwal, Arjun Rampal, Jacqueline Fernandez.

Reportedly the film will hit the theatres in Mid-2022 after Pawan’s another film Named Bheemla Nayak, which is releasing in Jan 2022.
Hari Hara Veera Mallu is being helmed by Gabbar is Back (2015) director Krish Jagarlamudi. A Dayakar Rao is bankrolling the film along with A. M Ratnam.

This action-comedy has all the big names from the south The Music is given by the known composer S.Thaman, it is made under the banner of Mythri Movie Makers who are also producing Allu Arjun Starrer Pushpa. Along with Mahesh, Known south actress Keerthy Suresh and comedian Vennela Kishore are featured in the movie.

Sandalwood star Kiccha Sudeep will next be seen in Anup Bhandari’s directorial Vikrant Rona, which is also a screenplay written by Anup Bhandari. This big-ticket film is backed by Shalini Jack Manju and Alankar Pandian under the banner of Zee Studios and Kiccha Creations.

Bollywood actress Jacqueline Fernandez will also play a pivotal role in the film. Cinematography and Editing have been carried out by William David and Ashik Kusugolli respectively. The music is given by B Ajaneesh Loknath.

Mass Maharaja Ravi Teja will be soon coming on the big screens with his long-awaited action thriller Ramarao On Duty. Earlier it was scheduled to release on 25 March, but later makers pushed back the release date to 17 June 2022 owing to Rajamouli’s big-ticket film RRR.

It features Ravi Teja in the protagonist role, along with him Jai Bhim, Malayankunju fame Rajisha Vijayan will be seen in the lead actress role opposite Ravi Teja.

Three-time national film awardee Mollywood actor Mammootty will soon be seen in a Telugu language spy thriller film titled Agent. He will be starring alongside Akhil Akkineni, the film has already made much hype as the two stars from different cinemas will be seen together.

Surender Reddy directorial this film is backed by Rambrahmama Sunkara under the banner AK Entertainments and Surender 2 Cinema. Surender also co-wrote the screenplay for the film.

After giving Rs 100 Cr film at the box office, the Doctor fame has made much anticipation among the viewers for his forthcoming venture, titled Don. The film also made much hype through its trailer and the songs.

We will witness the successful film of the 2021 Doctor Jodi, Sivakarthikeyan, and Priyanka Arul Mohan once again on the silver screens. Along with them S.J. Suryah, Samuthirakani, Soori, and Bala Saravanan will also be seen in pivotal roles.